Hole Central Hospital Magic Victim Ward is located in Hole that mostly treats on people who are victim to Magic Users. The Hospital first appears in the manga in Chapter 2 of Volume 1. Its administrated by Dr. Vaux.

Created after a young Shin annihilated Hole's militia and the humans gave up trying to defend themselves against Magic Users, because of that, the Magic Users trips to Hole increased so much that the city has to make a special sector for people injured or morphed by magic, mostly just prolonging their inevitable death or poorly improve their lives. Most of the patients come in critical condition and because there is no cure to magic (except by killing the sorcerer who curse them), victims live the rest of their lives in that condition.

After Kaiman and Nikaido started their Magic User hunts, few sorcerers came to Hole so the demand started to low. Kaiman had a part-time job in there, helping Vaux while collecting information about the who cursed his head (Kaiman actually was little to no help, lazing around doing simple chores and asking Vaux for money).

Both, Nikaido and Kaiman stayed there when they felt sick or needed help, (after the fight with the cleaners Shin and Noi, Kaiman was beheaded and Nikaido seriously injured, Vaux took care of both).

Prof. Kasukabe usually goes to the Hospital with Jonson to keep Vaux company (even though Jonson could not be able to stay there due the fact he is a mutated giant cockroach).

The Hospital was took over by the remains of the En Family when they scaped from the Magic User realm due sudden the apocalyptic rain, and helping Vaux with the daily chores like cleaning, making coffee and bringing the newspaper to him (he was terrorized by their presence but got used to it). Vaux tried to get rid the Family Goons with the notice that the top members of the organization died in the sinking of the Central Department Store, the notice was actually effective making the goons storm out the hospital. 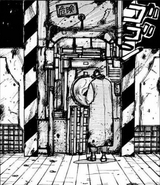