Q Hayashida (林田 球 Hayashida Kyū), born 1977) is the creator of Dorohedoro which was first produced in 1999 and formerly published by Monthly Ikki (1999-2014), but is now being published by HiBaNa magazine.

Not much is known about her, not even her real name, and most of the information we do have about her childhood, art style, and studies is thanks to the various interviews she has given.

Even before starting college, Q Hayashida had already settled on becoming a manga artist, submitting art to different magazines, and working as a freelancer for a while. In her own words, her art style used to be "awful" before college, and she "wasn't even able to copy Toriyama's Dragon Ball style if her life depended on it". Her mother usually told her how bad it was too, though thereby only making her tougher and giving her the will to progress.

The first time Q Hayashida had her artwork printed was in a pamphlet at the fine arts prep school she was attending at the time. She recalls not being very interested in a lot of her classes, since they often had the students do black-and-white sketches of plaster busts from different angles over and over again, which in her opinion could sometimes lead to being unable to produce anything good due to an unfortunate angle. Figuring it wouldn't do her any good anyway, Q Hayashida skipped most of her prep school classes.

Almost immediately after entering the Tokyo National University of Fine Arts and Music, where she majored in painting, her art style improved and became almost similar in quality to the work she is known for today. Though Q Hayashida wasn't a good student per se, realizing that there was almost no difference between college and what she used to do in high school, she kept doing doodles and improving even more. It was in college that she started to take art seriously, and focusing on starting her career as a manga artist. She got her debut at Shogakukan Monthly Ikki in 1999, where she started working on her most prominent work up to date, Dorohedoro.

She is obsessed with the Dynasty Warriors games, to the point that her PS2 broke at one point, and considers them highly addictive. She likes reading Romance of the Three Kingdoms manga, and is also a big fan of the Shigurui manga, Motofumi Kobayashi's Omega series and King Gonta's Soten Koro. According to Q, she enjoys reading Puripuri-ken as she eats, but seems just a little bit embarrassed by the fact. She is a big fan of Akira, and owns all of Junji Ito's and Kazuo Umezu’s work.

The author openly admits that, even if she enjoys an open spectrum of different manga and video games, most of the things she finds appealing are directed at boys, saying she doesn't see herself drawing shojo manga.[1]

For every new chapter Q Hayashida produces, she writes about ten draft pages beforehand, where she comes up with the story using plot background details, character designs, and various notes that together make up the chapter.

Starting with a bullet point list that she discusses with her editor, Q Hayashida comes up with a more fleshed-out plan for the plot and decides on the general look and panel distribution of the pages. Combined with the pre-written dialogue and the rough sketches, the final draft is complete.

Although she puts that much work into the chapter drafts, Q Hayashida admits she would rather ink the individual pages right away after finishing the sketch, similarly in a process to how she drew her first manga for Afternoon’s seasonal award. Until she started working on Maken X, Hayashida preferred drawing page by page, without having a general plot in mind.

She finds it important to do the volume covers herself too, as, according to her, only drawing the manga would be too monotonous. For that she usually prints the images on tracing paper and then uses textured paper and multiple layers of paint, which give the covers, as well as the colored pages, that unique, Dorohedoro-esque look.

Q Hayashida made her manga debut with her early creation of Sofa-Chan in 1998, which told the story of a female ghost who lives in a couch.

Maken X Another was another 3 volumes series published by Magazine Z that Hayashida made from 1999-2001 in collaboration with game developer Atlus, after their game Maken X was finished. 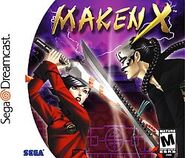 Later on in 2011, Hayashida created a oneshot manga for the video game Shadows of the Damned in an Artbook titled Huvahh. 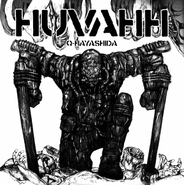