Hungry Bug is a restaurant owned by Nikaido located in a outlying district of Hole, close to the infamous passage where Kaiman was found. The area is well known to be frequented by the Magic Users, and due to this, customers tend to be rare.

The outlying district is, according to a comment Nikaido made to a Magic User child, forbidden to kids.

Hungry Bug is a dirty, small building that's partly infested with cockroaches. The interior of the kitchen has big pipes running near the ceiling with multiple pork bodies and other various cuts of meat hooked onto the pipes. 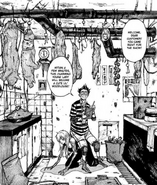 The front of the restaurant - as seen in Curse 154