Chota (烏太) is an elite Magic-User, one of the "big brass" of The En Family, and the most avid fanatic of En. He is completely obsessed with En and ever-hopeful of being his partner.

Chota is a big muscular tan man, doesn't wear a shirt, wears a small black belt around his waist, armored leggings covered with spikes resembling ostrich print material and reptile print Italian ankle boots. He wears a furry black bird mask with no eye holes and a small beak revealing his rather grotesque looking teeth. He also has a tattoo of a heart with En's name on it on his left upper arm.

It's later revealed in the series that his face is actually disfigured, with no lips thanks to a special surgery he was subjected to in order to be able to produce smoke from his mouth as well as his hand, it was a success but the side effect of the process left him unable to regenerate the skin on his face, and thanks to his dispelling-type magic, any attempt to use healing smoke to regrow his lips ended with no results.

Chota is surprisingly kind to everyone, but mostly towards En. He often attempts to convince En to become his partner, but is constantly declined, to his dismay. Due to En choosing Nikaido as his partner instead of him, Chota, being angry and very jealous, continuously tries to get rid of her. When Asu transformed him into a clone of Nikaido, Chota was disgusted to look like her, but over time started to even consider living the rest of his life in that form, thanks to the attention En gave him. Chota also liked to use cute embroidered underwear and fancy women clothes while he had Nikaido's appearance.

Presented as a man who En will only rely in the most daring situation because of his dislike of him, Chota was turned to dispell Ebisu's magic from Noi's body after she was accidentally exposed to it and became a monstrous lizard humanoid. Most of his time is spent in a giant bird cage with a tea table beautiful adorned inside a big luxury room locked from the outside by En. Despite the fact, it is known that he is able to move freely around the mansion, such as to go outside to drink tea, listen to radio programs and sit in the Mansion's private forest.

Since his first appearance he started to be near the other close Family members more often, even helping to resolve a crime scene in the mansion, thanks to his knowledge of forensic investigation. Once Nikaido become En's partner, Chota was infuriated and unsuccessfully tried over and over to kill her in silly ways, when Asu helped Kaiman and Nikaido to escape from En, the confused Magic User was morphed into a exact clone of her, and started to live his dream to be near En all the time and expressing his love to him without be rejected, but getting angry to him from time to time due En's lack of respect or hate to his former appearance (every time someone asked about where Chota was, En simply replied that neither he didn't care or he didn't wanted to know, even telling him to change into "Her normal form" when all the top members, and Ebisu, were subjected to the Dream Machine Mushroom, making him annoyed).

Due the fact that he could not use time-type magic, he constantly made excuses to never help En to travel back in time to resolve his most dreadful fear once and for all, and he believe he could live like that, until Asu's magic was dispelled and he warped once again to his former self, En was infuriated and demanded to know what happened to Nikaido, then Chota accidentally torn apart his contract (which Asu used to transform him into Nikaido) making En faint in front of the shocked Magic User, who carried him up to his bedroom, once En was recovered, Chota was really happy to see him again and tried to kiss him, En replied turning his whole head into a big mushroom.

A month passed, En captured Nikaido once again, Chota remained with his mushroom head, just because it smelled like En, moisturizing and taking good care of it. He was the one that gave Fujita a positivism hair clip to put it in Ebisu's head once she got revived, the clip got stuck inside her brain due Noi's lack of care when she healed the little Magic User corpse. When En faced The Cross-Eyes Boss, he entrusted Chota to protect Kikurage and morphed his mushroom head to send him flying away from him, in mid air, the magic in his head was dispelled, in that moment the Magic User knew En was killed by the Cross-Eyes Boss, crying over his dead love while falling from the sky into a tree in the Hydra Forest, where he broke all his bones but could protect Kikurage at least, the little animal remained near him for a month while he got stuck in there slowly becoming skin and bones due the lack of food and water, loosing all his muscles and crying for anyone to help him, scaring every person who found him, until he was saved by Fujita and Ebisu while they were looking for Kikurage.

In the new En's family hideout, Chota didn't lose a moment and started to work out again, regaining his muscular appearance in no time, while deciding what would be their next move to recover the mansion (now the new headquarters of the Cross-Eyes) and resurrect En, he volunteered to torture Dokuga, their Cross-Eyes Prisoner in order to find answers using a diet bug he had in his stomach to slowly consume Dokuga's flesh, even with that, he stayed quiet and Chota got the diet bug back in his stomach, Noi told him that's the kind of gruesome things that makes En hate him.

The Top members went to the department store to buy ingredients for a new Fujita doll (the last one was destroyed due a clumsy accident), using a magic carpet to transport them, but thanks to the interference of magic smoke from the store itself, the carpet fell to the ground, scattering the members, leaving everyone on their own inside the warped building.

Seemed like Chota and Turkey came together inside the building where were assaulted and mutilated by Shin, who was turned into a zombie by Devil Kai, reducing the two into rolling heads. 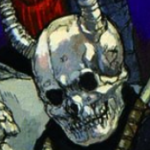 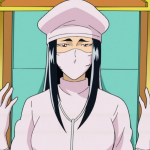 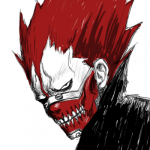