Silence At The Table

The story begins with En talking on the phone about his reservations at a restaurant. He then continues to interrogating a man who is just a head hung from the ceiling. Instead of an answer, the man laughs hysterically about how many people want to kill him so En decides to turn him into food.

The scene transitions to Ebisu who is hallucinating about how she was attacked by Kaiman and Nikaido as she and Fujita soar through the sky on a magic broom to get to this clothing store for formal wear for this En Family meeting. Since Ebisu is disfigured, she cannot change by herself so she asks Fujita to help her into her dress. The dress is self-assembly so Fujita had trouble with making it. Fujita later realizes how they are late, so he does not finish making her dress but gets her to wear it anyway.

As soon as Fujita and Ebisu make it to the restaurant they make themselves acquainted with their co-workers being Shin and Noi who were waiting on a couch. Later on, a restaurant employee helps them to their table and asks to take their coats and masks. Noi reveals how he's actually a girl to Fujita and Ebisu as soon as she takes off her jacket and mask which intrigues Fujita dearly. They all enter the room and join En for dinner and talk about how Shin and Noi will be the ones to kill Kaiman and Nikaido.

Aitake and Maitake enter through a stage and perform a metamorphosis show and transform into Kaiman and Nikaido. Aitake greets En and recalls if he enjoyed eating calf's liver and En notices instantly how they're performer impostors since he only eats mushrooms. They take out their guns and before they can shoot Shin and Noi attack their hands with their utensils causing them to drop their weapons. They try to escape by jumping out the window but are stopped immediately when En shoots his magic at them and they are changed into mushrooms. En turns to the waiter and orders him to find the real Aitake and Maitake. If they are dead, use their bodies as a substratum for the mushroom cultivation. Then he orders bring the fake Aitake and Maitake mushrooms to the kitchen.

The story ends when the scene transitions again back to Nikaido and Kaiman who share gyozas as Kaiman yells at the air demanding the Magic Users to come over to Hole so he can kill them. 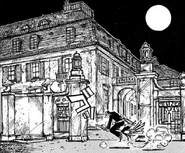 The Front of Shin's Mask

Shin and Noi acquaint themselves with Fujita and Ebisu 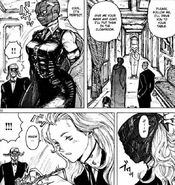 Noi is revealed to be female 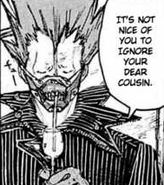 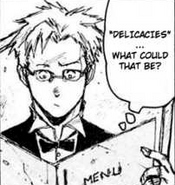 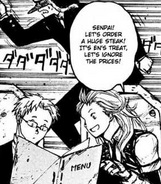 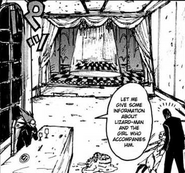 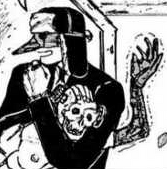 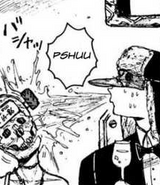 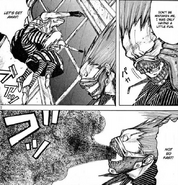 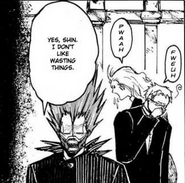