Curse 4: In the Bag (袋の中, Fukuro no naka) is the 4th chapter of Dorohedoro

The cover page appears to be a colored picture of Kaiman holding one of his knives and pointed a middle finger. In the bottom left corner of the cover, there appears to be various photos of Teeth and hands. One of the hands appears to be emitting smoke.

The story begins with Shin day-dreaming about smashing a man in the head with his hammer when he is awoken by his subordinate, Noi in a car. They then proceed to En's Mansion.

The Scene transitions to Kaiman walking in the rain trying to get to Hungry Bug when he finds a bento and note on the doorsteps claiming how Nikaido is sick but was able to make him this bento he asked for. Kaiman heads to the hospital instead to play cards with Vaux and talk about the rain in hole being from the residues of Magic User smoke. Kaiman after winning a game, proceeds to work for a while then goes to eat lunch but is interrupted when Vaux asks him to take a bag into an incinerator. Kaiman notices immediately after Vaux leaves, how the bag strangely moves.

The Scene then transitions to Noi shooting 7 people in the head against a wall as Shin attacked 7 other people with his hammer and his magic. The last person left to kill in the room is a magic user boss who seems to be a part of the Crosseyes. Shin decapitates him with his smoke then it transitions back to Kaiman.

The bag speaks about how Shin killed him, put him in a bag and threw him in hole. The head in the bag pleads for Kaiman to kill him so Kaiman simply throws him in to the incinerator like Vaux told him to. Kaiman goes back to Hungry Bug to bring back his empty bento, before he could head off home the rain stops and Nikado asks him to stay for dinner.

The Scene transitions again to Shin and Noi who are walking back to En's mansion. Noi, in happiness, lifts her arms up and yells when Shin tells them they can eat beforehand but the bag she was holding bursts and a head falls out. 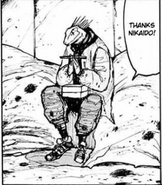 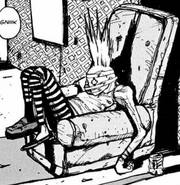 the magic user alludes to Shin

hole begins to light up again 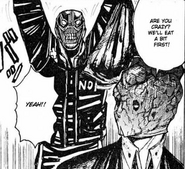