The Guy from the Nightmare

Akumu no naka no aitsu

Third Curse: The Nightmare Man (悪夢の中のアイツ, Akumu no naka no aitsu) is the 3rd chapter of Dorohedoro

The Chapter begins with En advising Fujita to find a new partner being the one who turned Kaiman's head into a lizard with a magic device that has all the data on all the magic users.

Meanwhile, Kaiman is throwing up in a toilet as Nikaido watches him in concern. As he vomits, them man inside his head emerges from his mouth. Before Nikaido could get a glimpse of his face, Kaiman awakens realizing it was all a dream.

Kaiman makes his way to find Nikaido so they can take try taking pictures of the man inside of his head. After getting their photos developed they pick them up, before they could look at the pictures they notice a Magic User Door. The Door dissipates and reveals a small magic user wearing a skull mask.

The scene transitions back to Fujita who finally finds the magic user he needs, named Ebisu being the one Kaiman and Nikaido saw behind the magic user door. Fujita notices how familiar Ebisu looks, and then suddenly remembers how he saw him once in hole when he was with Matsumura. Fujita hurries back to hole to find him.

The scene transitions again back to Kaiman and Nikaido who approach the Magic User Ebisu to check if he's the magic user Kaiman needs. They engage and combat and fight for a little while until Kaiman grabs onto his head and rips off his mask revealing how Ebisu is actually a girl. Kaiman stares at her for a while in shock but then despite her being a young girl, he bites her head.

As he bites her head, another magic user door appears in between Nikaido and Kaiman. The Door opens and Fujita pops out urgently grabbing Ebisu's arm to save her, but since Kaiman was biting so hard onto her face Fujita accidentally rips her face off when he pulled her away.

In the end Ebisu and Fujita get away, leaving Kaiman and Nikaido confused but then they check the photos noticing how Kaiman has tooth decay.

Kaiman wakes up to find out it was just a nightmare 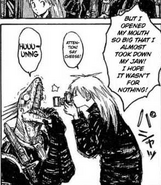 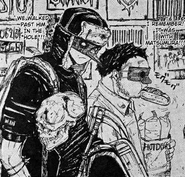 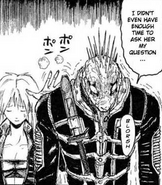 "oh you have bad tooth decay!"
Community content is available under CC-BY-SA unless otherwise noted.
Advertisement