Competition of the So-Called Underworld

The Chapter cover appears to be Kaiman and Nikaido in Hungry Bug attacking cockroaches in combat and spraying bug spray.

The story begins with Nikaido fighting in a boxing ring but soon collapses due to exhaustion, a man laughs at her loss and wipes streaks of blood on her face from her nose bleed as he claims the invincibility of another man who fought her named Red Brake.

The scene transtions to Kaiman knocking at the steel garage door of Hungry Bug, assuming Nikaido is asleep; Kaiman walks to her apartment and opens the code-locked door to wake her up. He searches the entire building but finds no sign of Nikaido but a flyer advertising a boxing tournament that awards 100 Million yen for first place. He also notices a small attic on the top of her bedroom ceiling and enters then picks up a big spider by the web admiring its size; Unknowingly ignoring a menacing looking Magic User mask designed as a hockey mask with a gas mask, hung up on a frame behind him. Kaiman hears a loud banging at the door and goes down to angrily demand his identity in which the man is merely here to collect Nikaido's debt. Kaiman reminisces about the flyer he looked at earlier and the prize money, which he finds out her intentions of going there is to pay off her dues.

Worried about Nikaido and his gyoza, Kaiman goes off to find her by following the location of the advertisement. He finds a little shoe store that is guarded by a man who says the entry fee is 10,000 yen to fight, unable to come in for free Kaiman is forced to pay for the fee in order to find Nikaido. The man takes Kaiman down a basement and gives him some clothes to change in a room and tells him to wait too. The room is filled with combatants and Kaiman approaches an claimed acquaintance and asks about Nikaido's whereabouts, the guy tells him how Nikaido came two days ago and is going to fight Red Brake to win the 10 Million yen. Seeing the amount of fighters, Kaiman assumes Red Brake has to be a Magic User.

Kaiman soon enters the ring to fight Red Brake and is put into a muzzle due to his sharp teeth. Before the fight begins, Kaiman asks if he knew where Nikaido was but he answers that he hasn't, they then proceed to fight in which Kaiman throws the first punch; straight towards Red Brake's face and swinging more punches at mach speed to his stomach. In the meantime, a man watches Kaiman intently through a TV screen in a different room, he talks to himself about Kaiman's worth on his head and summons a Magic User door after putting his yen Magic User mask on. The battle rages on and Kaiman screams at Red Brake on Nikaido's location but is ignored with just a grin as Kaiman punches him rapidly; Red Brake finally makes a move on Kaiman and ducks to punch Kaiman in the stomach making him lose his balance. Red Brake urges Kaiman to leave since he has lost but Kaiman stops to add about Red Brake making a deal with a Magic User to keep the best fighters around and some others whos intentions of placement is unknown. Red Brake replies how the rest are sold along with Nikaido he assumes as well or used as Magic User experiment/practice.

The scene transitions to Nikaido who wakes up to find herself tied up and notices the yen masked Magic User being payed for selling off Nikaido. Behind her she hears Kaiman's voice in which she turns around to see it's just a live screening of him being heavily beaten by Red Brake who gets his powers from the yen masked Magic User. In aggravation, Nikaido snaps her entanglement and gets up to attack the Magic User who takes out a gun in defense, Nikaido jumps straight in the air and chops off the Magic User's armed hand and his head with just the pure strength in her arm. After the death of the Magic User, Red Brake's physique and strength dissipates immediately to the lack of the magic user's power. Kaiman swings one last punch and flings Red brake straight out of the ring which makes him passes out right away, Kaiman sighs in relief of his victory but begins to cry because he won't be able to eat her gyoza anymore. Nikaido who was standing behind him breaks the tears with a calm reply of how she'll promise to make some when they get home which startles Kaiman.

True to her word, they head home and Kaiman explains how he went looking for her all over Hungry Bug like the attic and Nikaido sighs in relief that he somehow didn't notice her Magic User mask. Kaiman later notices how Nikaido brought all this money that she stole from Red Brake's winnings which Kaiman scolds her for but Nikaido retaliates with how she was only in debt because he never pays for his gyoza. 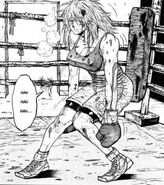 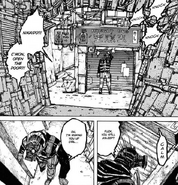 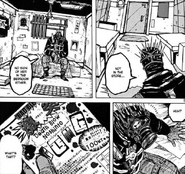 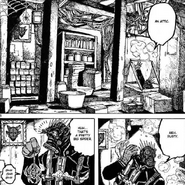 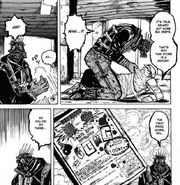 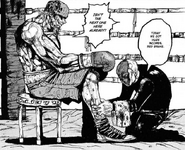 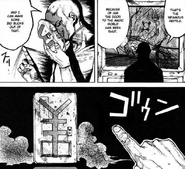 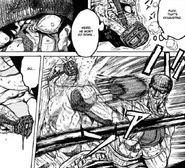 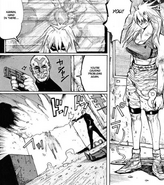