The Chapter cover appears to be a portrait of Shin and Noi in readying for a fight.

The story begins with Nikaido walking through the hospital selling gyozas to patients who join Kaiman later who was stitching a patient's arm from knife cuts. They later find Doctor Vaux eating sushi and Nikaido asks about if he still has a newspaper cutout of this affair 10 years ago that involved Shin. As Nikaido flips through the pages of a book with the article Vaux scrambles to attack Kaiman who stole his sushi. She soon finds the article of Shin younger marked as a killer.

The scene transitions back to Turkey's House in which Turkey introduces herself and his magic abilities to make living puppets. She demonstrates his magic by asking Shin to first ask about a person he knows and to blow his smoke into a little glass container in which Shin thinks about Noi and follows his instructions. Turkey leaves the room for a little while with the small container which leaves Shin and En together on a couch and Shin asks how his puppets are made, En replies with how his puppets cannot talk nor use magic but are very useful since they are drawn to finding their original. Turkey later joins the two with a giant platter covered with a metal lid which turkey picks up to reveal an exact clone puppet of Noi. Before Shin could mutter a real response to its naked appearance, coincidentally the real Noi's voice is hoarse through the house and Shin immediately demands Turkey to make it disappear.

Shin waves his arms rapidly in the air to wave the smoke from the dissipating body as Noi, Ebisu and Fujita enters the room. Noi brings Shin his fixed mask and adds how she did also fix Ebisu though her neck cannot stay straight and how she constantly mutters to herself. Turkey once again demonstrates his magic to the rest and how he prepares the puppets in which he uses many various types of meat and spices and other cooking ingredients that the rest focus deeply on the nice smell it emits as it cooks, soon the puppet is done which reveals a tall man which is exact features to the man inside of Kaiman's head. Turkey after clothes the puppet with his old clothes and then The En Family begins their search following the puppet to the original. They follow the puppet into a small clothing store that the store clerk claims he's never seen the puppet before so they decide to clothe the puppet with better attire along with Ebisu because of the faint undead stench of her clothes; She picks out just oversized lingerie, a scarf, and mittens. The puppet appeared to be hungry due to the loud noises from his stomach and they follow him into a big restaurant in which the puppet is still unknown to the workers. They follow the puppet in a train that takes them down into an area in which third-rate magic users gather and into a small apartment, the puppet tries to open a locked door so Shin kicks it open.

As the puppet walks indifferently in the room, Shin and Noi investigate the landlord to see if they are familiar with the puppet and leave Fujita and Ebisu to watch over the puppet. The landlord admits to knowing of the puppet for a year but unknowing of his identity, Fujita searches the room as Ebisu smacks a pillow up and down letting feathers rush through the bottom when she notices a medium-sized crack on the wall's floor with a box in it. Before Fujita and Ebisu could inspect the box further, the scene transitions back to Shin and Noi who hear Fujita scream. As soon as they come back upstairs into the room they find the Fujita bleeding on the floor and the puppet standing menacingly as he gnaws on the intestines of Ebisu. Noi comes to Fujitas aid and asks about his condition and he manages to mutter how the puppet got crazy as soon as he saw them with the box. Shin punches the puppet in the face and takes the box away from him but the puppet fights back and tries to attack him with these stakes in his arm sheathes and headbutts Shin. Shin impatient with the puppet punches straight through his stomach which causes the puppet to dissipate in smoke. Noi heals the two in the process and they break open the box with smoke which reveals a rotting severed head.

Noi heals the head so then his face could be more clear and it reveals the puppet's face. In the end, their whole mission was for nothing and Noi places the head in Ebisu's backpack for the later status report for En. 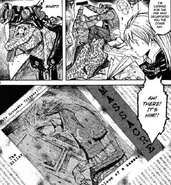 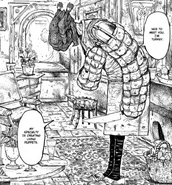 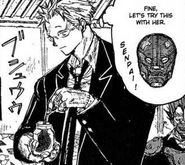 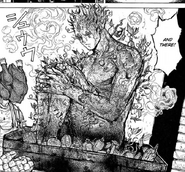 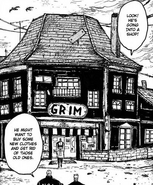 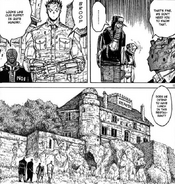 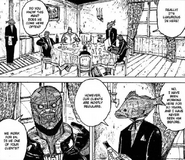 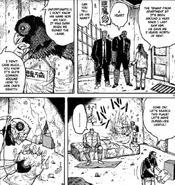 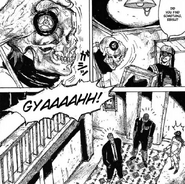 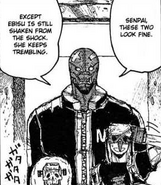 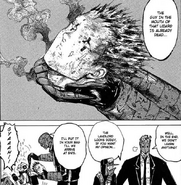