Bonus Curse 1 is the first bonus chapter of Dorohedoro featured in Volume 1 at the end.

The cover appears to be Beelzebub coming up behind some blood stained curtains with various objects hanging on the ceiling.

The story begins with Fujita in the left line to get his devil mask when he sees Noi who bids him good luck as she walks through the right door for elite magic users. Fujita also finds Shin who was standing behind him who questions him for the present in his hands, Fujita claims it is mandatory and asks for advice. Shin tells him to not be astonished and that his present is handmade, Fujita assures him his gift took 3 months to make himself.

A doorman yells for the next five people to come in and Fujita makes his way inside. The panels constantly switch from the comforting the elite magic user door to the prison-like lesser magic user side. Shin and Noi help themselves to pieces of cake while Fujita is demanded to wear a uniform and stand in line.

Shin and noi are told to place their masks in pots as Fujita and other lesser magic users are doused with hot water over their heads. Shin and noi pick out ingredients and stirs them in their pots while fujita is splashed with an unknown viscous slime on his face as a metal box clamps around his head. Shin and Noi pour the liquids from their pots into bottles and spray their magic at them as fujita sits quietly in fear. Shin makes his way first into beelzebub's tent while another devil walks forward to fujita and he offers his gift to him. Shin faces beelzebub and gives him his bottle and as a devil looks at Fujita's gift of mummified fairies he pleads the devil to make him his mask. Beelzebub takes shin's bottle drinks it and throws it up into clay and moulds it into Shin's mask and places it over shin's head. Fujita's bribe was denied since they don't work if their magic level isn't good and the box over his head is broken by the tips of the devils fingers,

A flower is placed on shin and Noi's mask indicating a perfectly made mask, they greet each other for their good efforts and wonder how Fujita's mask went. Fujita lies on his chest as steam curls up from his head. 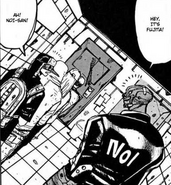 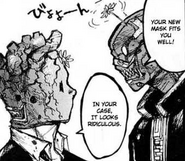 Shin and Noi's masks prove to be successful